Don't take our word for it!  See what our guests have to say...

My wife and I were met at the cruise terminal by Spencer first thing in the morning. From there we took the land portion of our tour with his brother, Small. The views going up into the hills around the island are spectacular. Especially looking down on the small fishing village.

The volcano was really cool, just try to breathe through your mouth and not your nose LOL. So many different stops it’s hard to keep track, but the waterfall was definitely a great photo stop. Banana plantation, churches, roadside stands and the list goes on, and that was all BEFORE the beach and the boat ride segment of the tour.

The boat ride was awesome, in and out of a bunch of small inlets and marinas. Lots of great photo chances of the houses and condos up on the hills and of course I can’t forget the “bat crack”. I’m not going to spoil it for you here. But you’ll surely enjoy it when you see it.

Two thumbs up for Spencer, Small and the rest of his crew who are ALL top notch.

My two sister, my mother and myself greatly enjoyed the trip, it was wonderful to see St Lucia.

We were well treated by Spencer (Small) thanks a lot.

What a Great Day Out

After meeting at the cruise terminal we walked 200 yds across to the speed boat which was waiting and ready to go. The sea was really calm making the fast transfer to Jalousie Beach exciting which on its own was an experience not to be missed. Our group was the first to arrive therefore had the pick of loungers on the beach. Food was great and drinks plentiful all looked after by the crew who did an excellent job. The return to the cruise terminal was also excellent, another fast transfer including seeing places of interest on the way.

Great value – thanks to everyone involved.

We recently had the wonderful experience of taking a Spencer Ambrose tour on St. Lucia. It was the highlight of our vacation. Dollar for dollar it is the best value of any excursion we have ever taken. Our tour guide “Small” was very informative and accommodating, as well as had a great sense of humour. The beach side lunch provided was excellent and served with all the liquid refreshment that could be asked for. Spencer himself ensured that everyone was taken care of as good as could be asked. I should mention that if you do suffer from motion sickness, that St. Lucia’s beautiful but very windy roads might require you to take preventive measures prior to the journey. I would highly recommend this tour to anyone thinking of taking an excursion on the island.

Thanks again to Small and Spencer and all of you staff for the enjoyable experience. 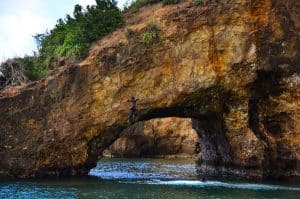 What a fantastic day! Spencer met us a the dock. We got on the taxi with Lawrence he was great very informative. He took us to many interesting places. Great views of the Pitons, stop by vendors by the road bought some fresh cashews, and some other items sampled bananas, bbq sauce.

We had a great lunch at the beach right between the Pitons. Plenty of food and drink for everyone. Spencer took us back to the dock on his speed boat. What a great way to end the day. He and his daughter showed us all the interesting spots along the way.

This tour is well worth the money you will not be disappointed.  God Bless You Spencer!

Met Raymond and Terry at the Port. These guys made the trip. They were polite, organized, informative and a lot of fun. We laughed all day at card tricks and jokes. Food was perfect at lunch and there were plenty of drinks available in the “tool chest”. They pointed out the sites on our way back to the ship and arrived in plenty of time for our 5pm departure.

Would do it again in a heartbeat.

Thanks Terry and Raymond – thinking of you from snowy New York.

We will never forget it!

We had a wonderful amazing day on your beautiful island. Your team did a great job and we enjoyed every minute.

Thank You for all.

I booked the Land/Sea Adventure for us and our 2 friends based off of reviews on Cruise Critic. I was really hoping it would be good since my friends were trusting me! Let me tell you, it was great!

It was easy to find them at the port and we returned in plenty of time to our ship at the end of the day. Our guides were Small and Shequana and they were informative and very fun to be with! Our group enjoyed seeing highlights and beauty of the island by land as well as what seemed like a whole new tour by speed boat along the coast with Terry & Raymond (who were also great) on our trip back to the ship. We really enjoyed Jalouise beach snorkeling at the base of the Pitons, we saw some great fish and Terry made sure we had everything we needed.

We want to come back to the island and spend more time and highly recommend Spencer Ambrose Tours!

Can’t wait to come back

My husband and I and our two friends booked this excursion and we were not disappointed! Small and Shequana (Spencer’s brother and daughter) were awesome. They picked us up at the port just as they said they would. They were very warm and friendly. They were very informative about all of the island and the stops that we made. We loved our whole day. We learned a lot at the banana plantation, enjoyed the beauty of the waterfall and hot springs. Our favorite part of the day was the snorkeling. We saw some amazing fish and loved snorkeling in the calm waters just off the beach. We enjoyed the stops along the coast as we headed back to the ship. We felt very safe and relaxed during our tour and hope to go back some day.

Thank you Spencer for training your staff so well and for making our time in St. Lucia so wonderful!